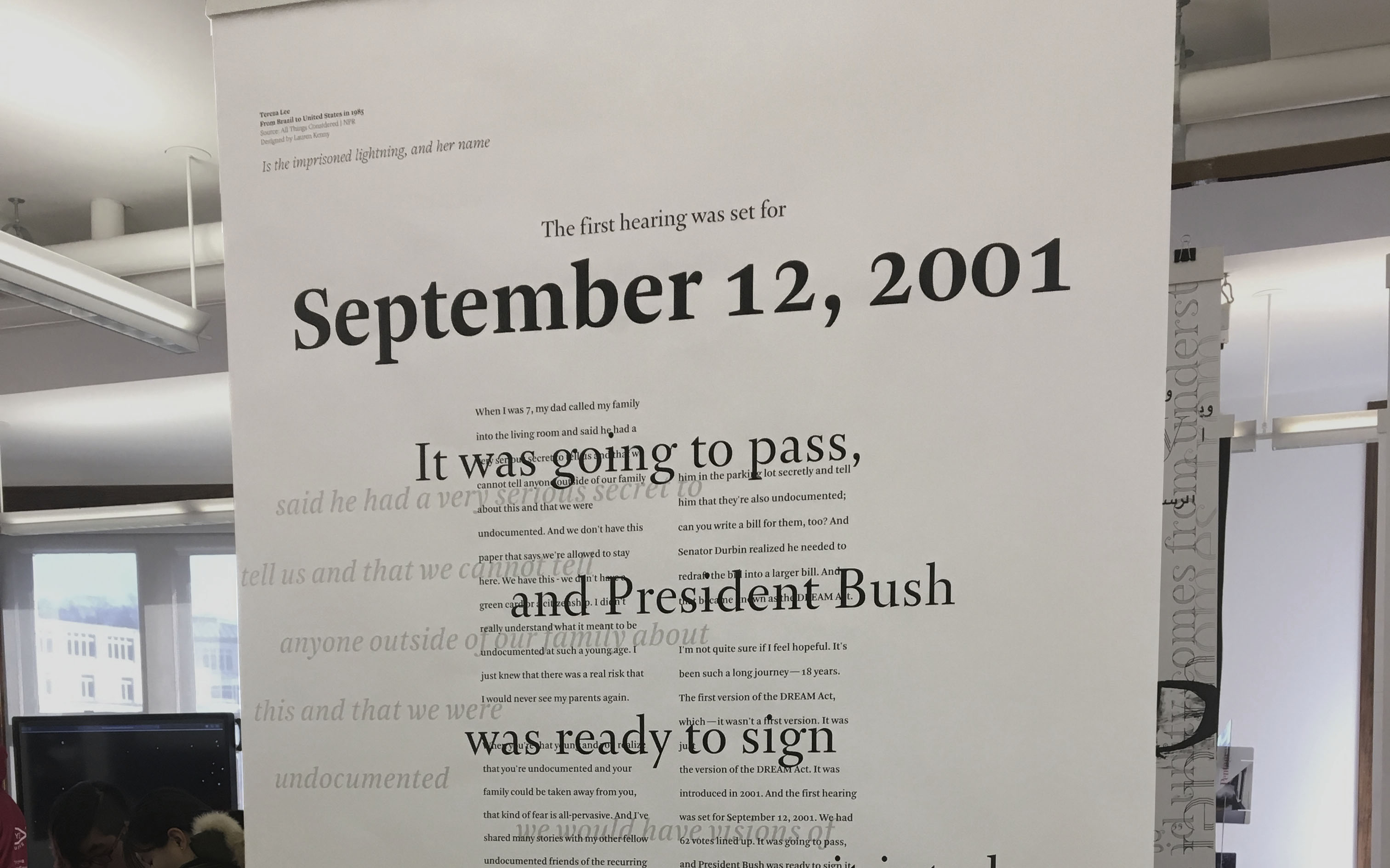 On a 36" x 72" hanging print, use expressive typography to share the story of an immigrant. Capture the story and the emotion through only black and white type.

In an All Things Considered segment on NPR, Tereza Lee shares her story of starting the DREAM Act and how September 11 changed her and many other immigrants' futures. This is text from that interview.

"When I was 7, my dad called my family into the living room and said he had a very serious secret to tell us and that we cannot tell anyone outside of our family about this and that we were undocumented. And we don't have this paper that says we're allowed to stay here. We have this - we don't have a green card or a citizenship. I didn't really understand whatit meant to be undocumented at such a young age. I just knew that there was a real risk that I would never see my parents again.

When you're that young and you realize that you're undocumented and your family could be taken away from you, that kind of fear is all-pervasive. And I've shared many stories with my other fellow undocumented friends of the recurring nightmares that we grew up experiencing. We would have visions of paramilitary-style raids, police raids taking our families away. And also with that kind of fear comes a deep sense of isolation.

Yes, it was just for me. I had a specific number to it. And personal bills usually go by unnoticed, and they pass very easily. So we were so excited. And some other undocumented students heard about this bill, and they would approach him in the parking lot secretly and tell him that they're also undocumented; can you write a bill for them, too? And Senator Durbin realized he needed to redraft the bill into a larger bill. And that became known as the DREAM Act.

And the first hearing was set for September 12, 2001. We had 62 votes lined up. It was going to pass, and President Bush was ready to sign it into law. And everything was canceled because of the terrorist attacks on 9/11.

From then, any immigration-friendly legislation was out of the question. And so that day was really what I feel like sparked a lot of fear."

How can type be used to express a story? How can emotions be conveyed through large scale type?

I started by picking out specific words and phrases from Tereza's interview that I felt conveyed the meaning of her story. From there I started crafting different layouts that I felt conveyed the story and the emotions behind it. An important thing that I kept in mind was viewing distances. I wanted this poster to have power both from far away and close up which requires layers to the text sizes and content. Here are some of my iterations. 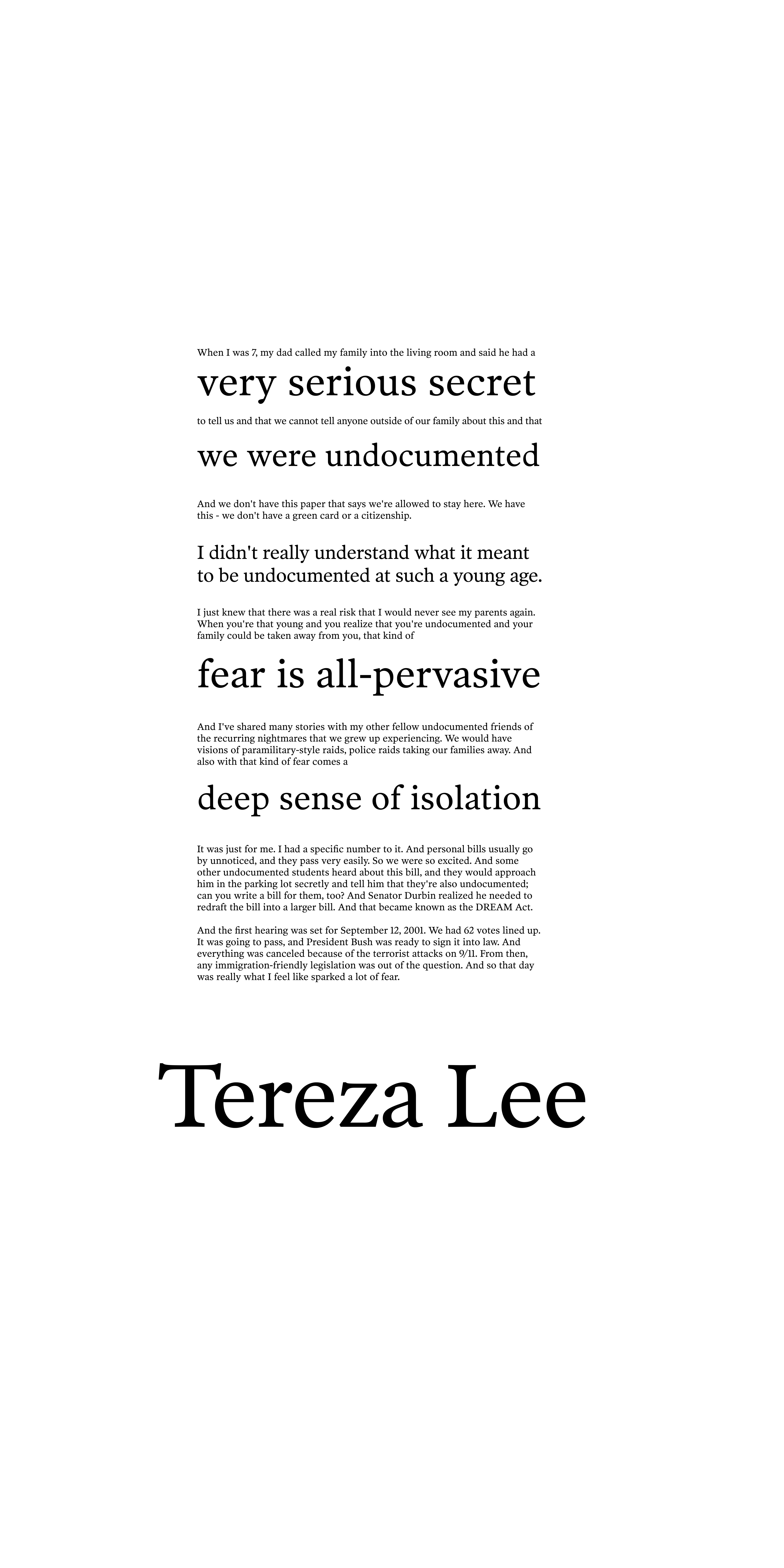 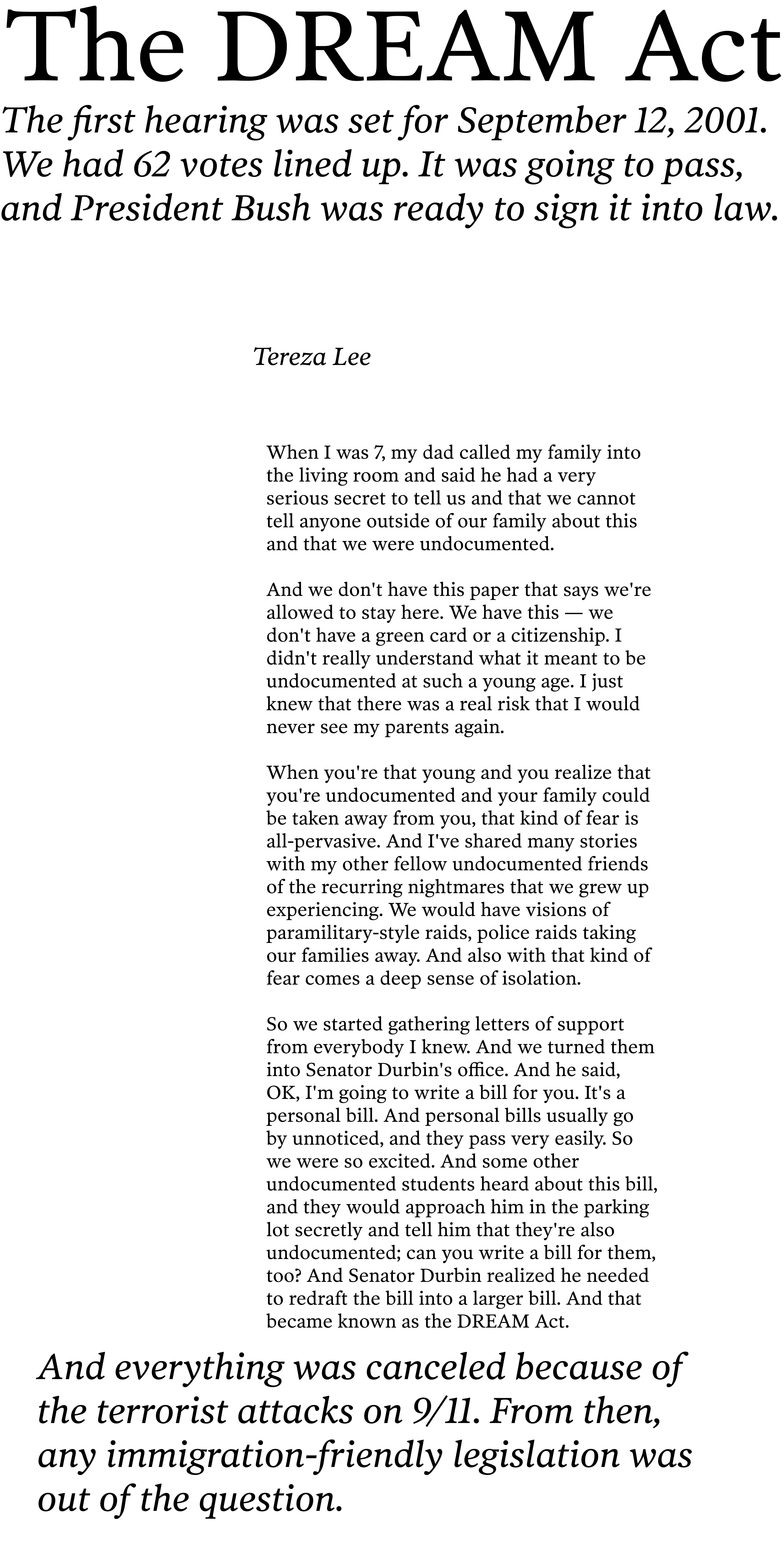 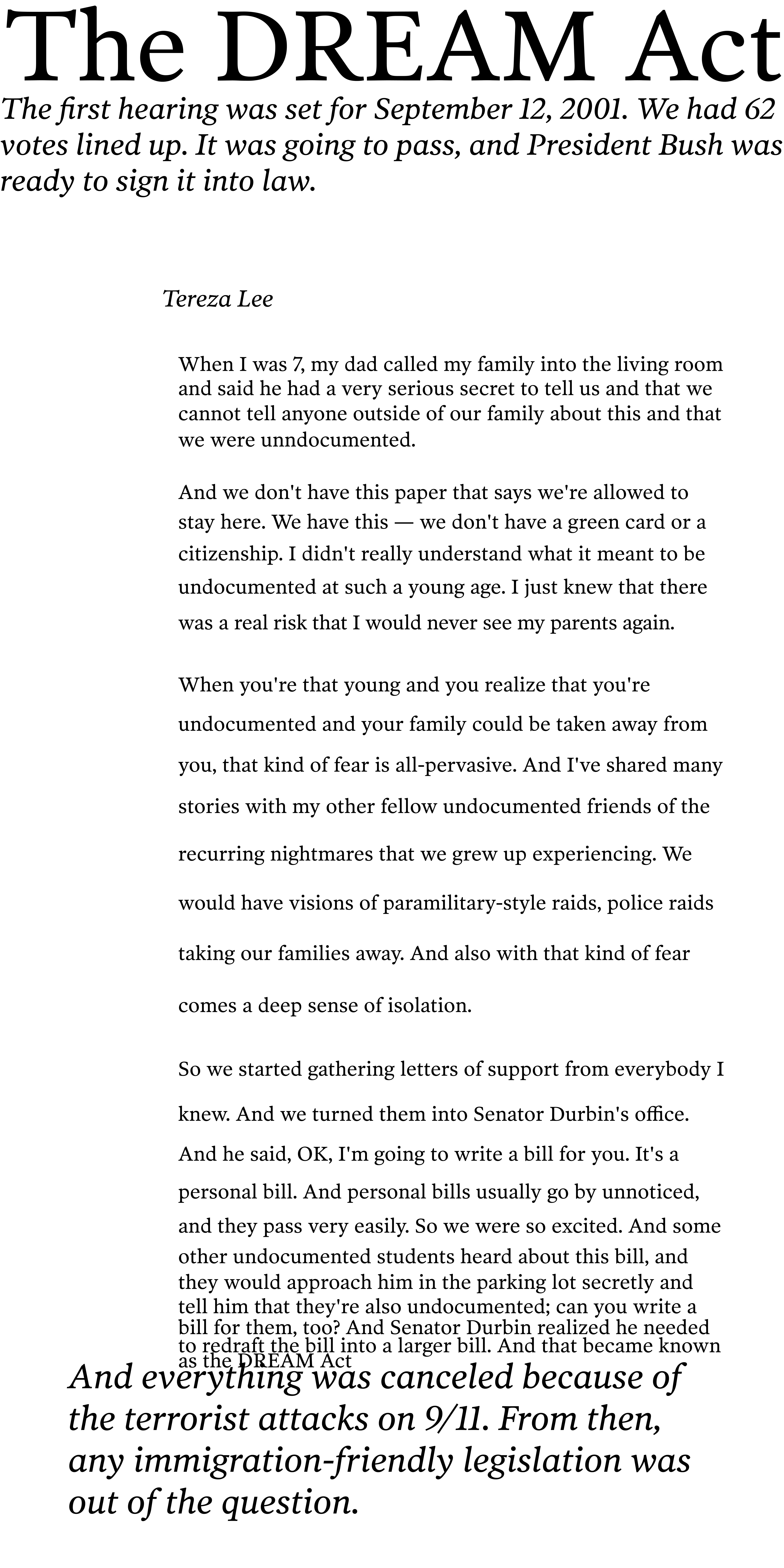 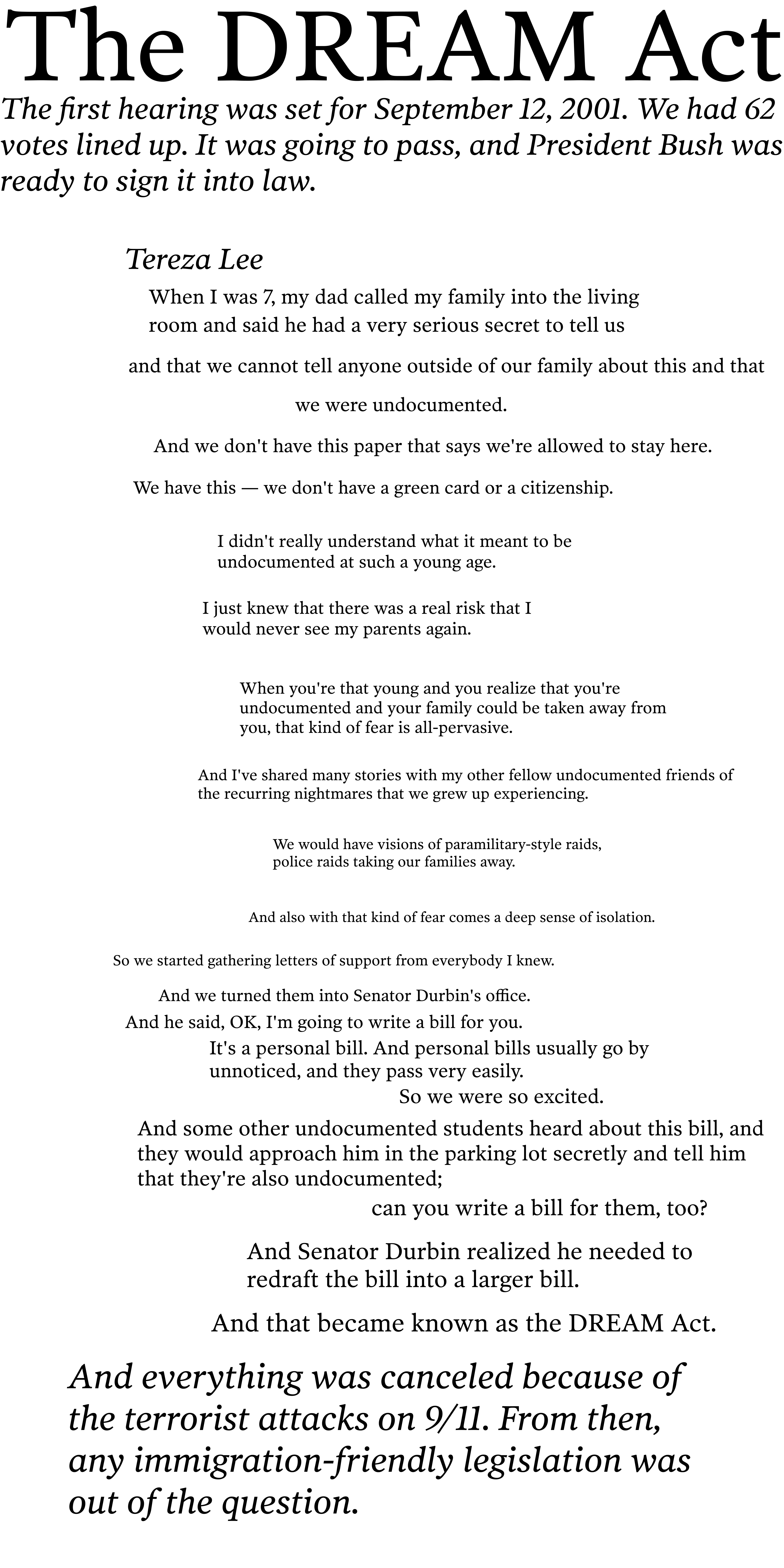 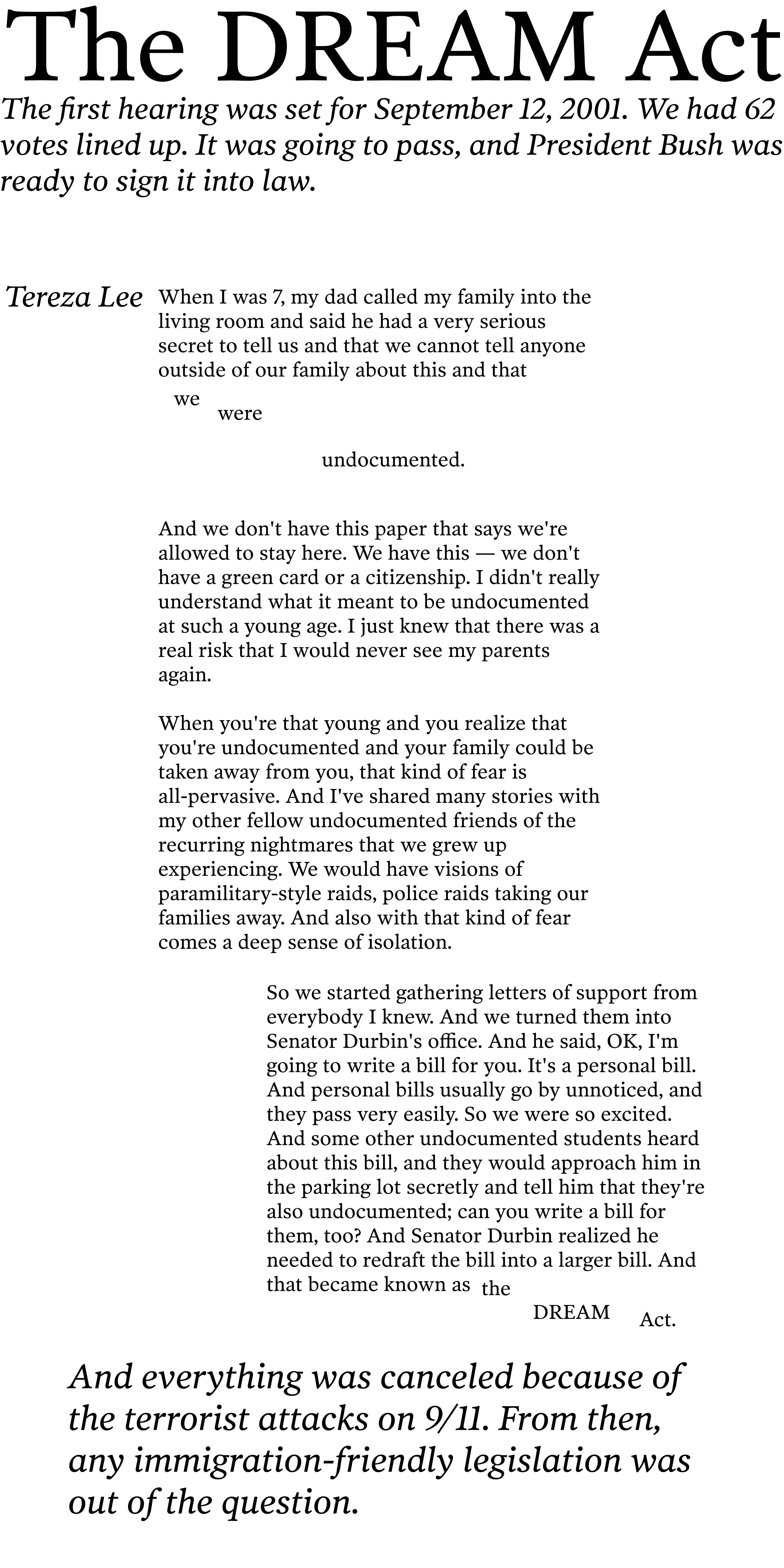 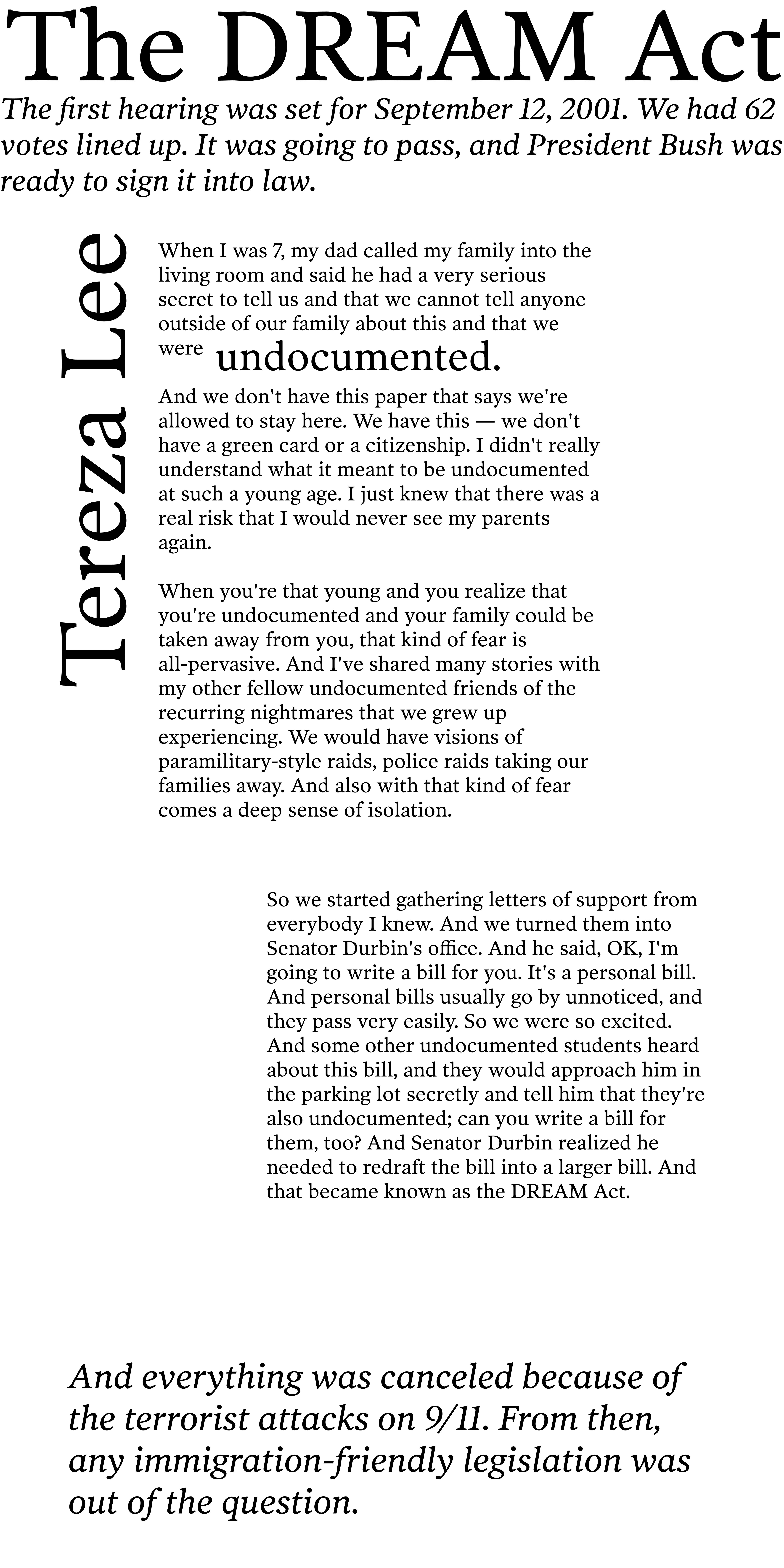 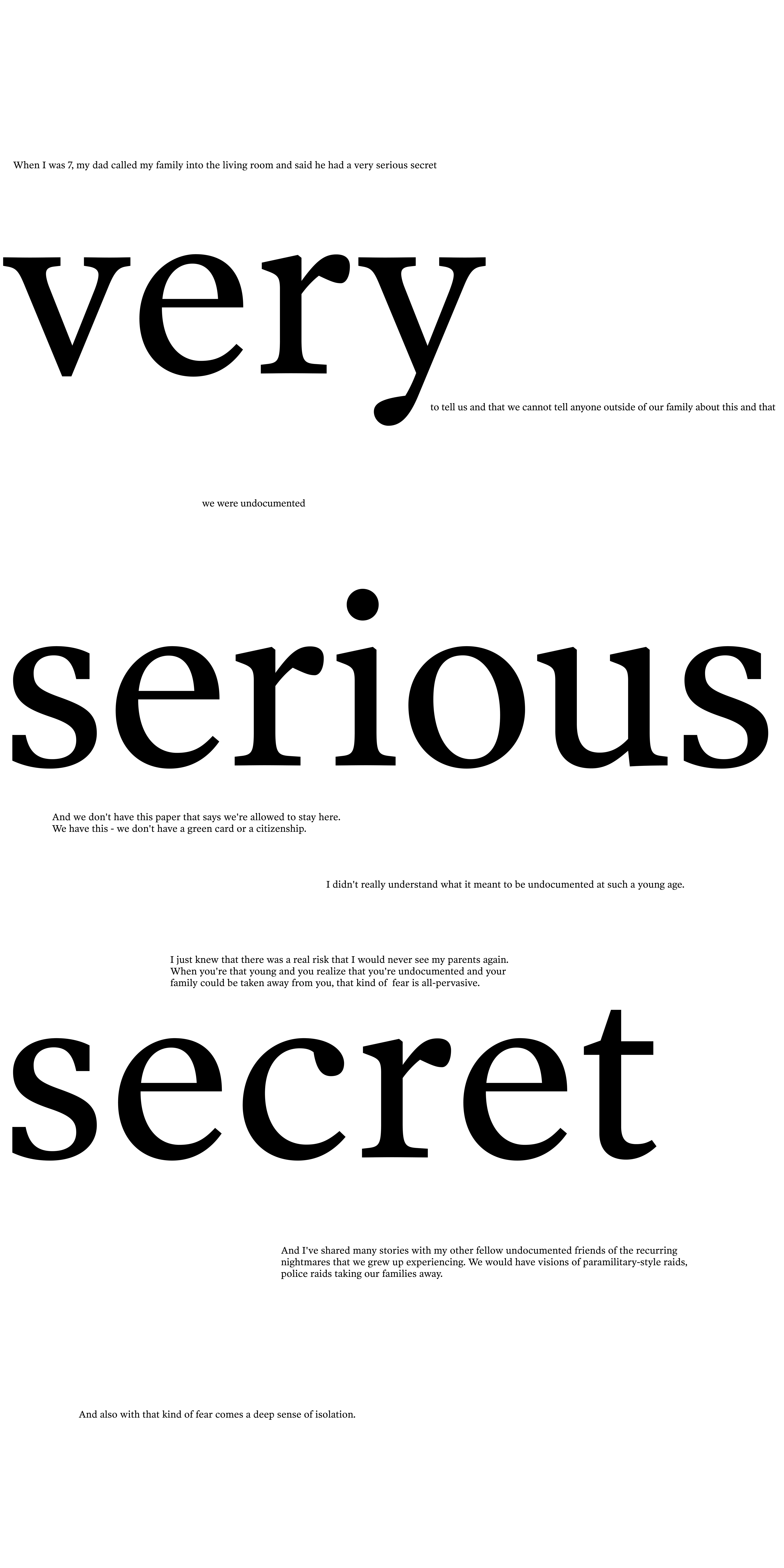 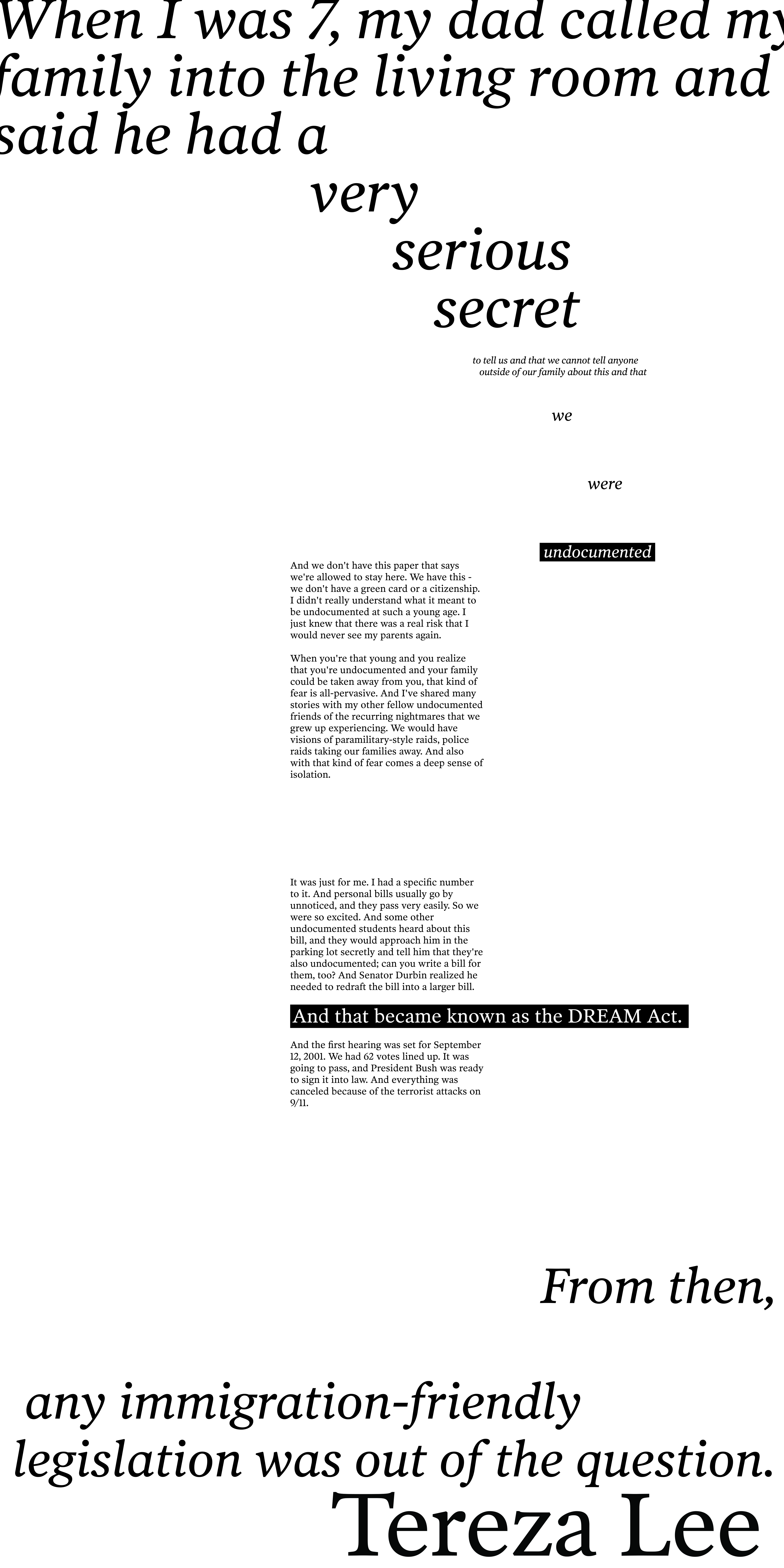 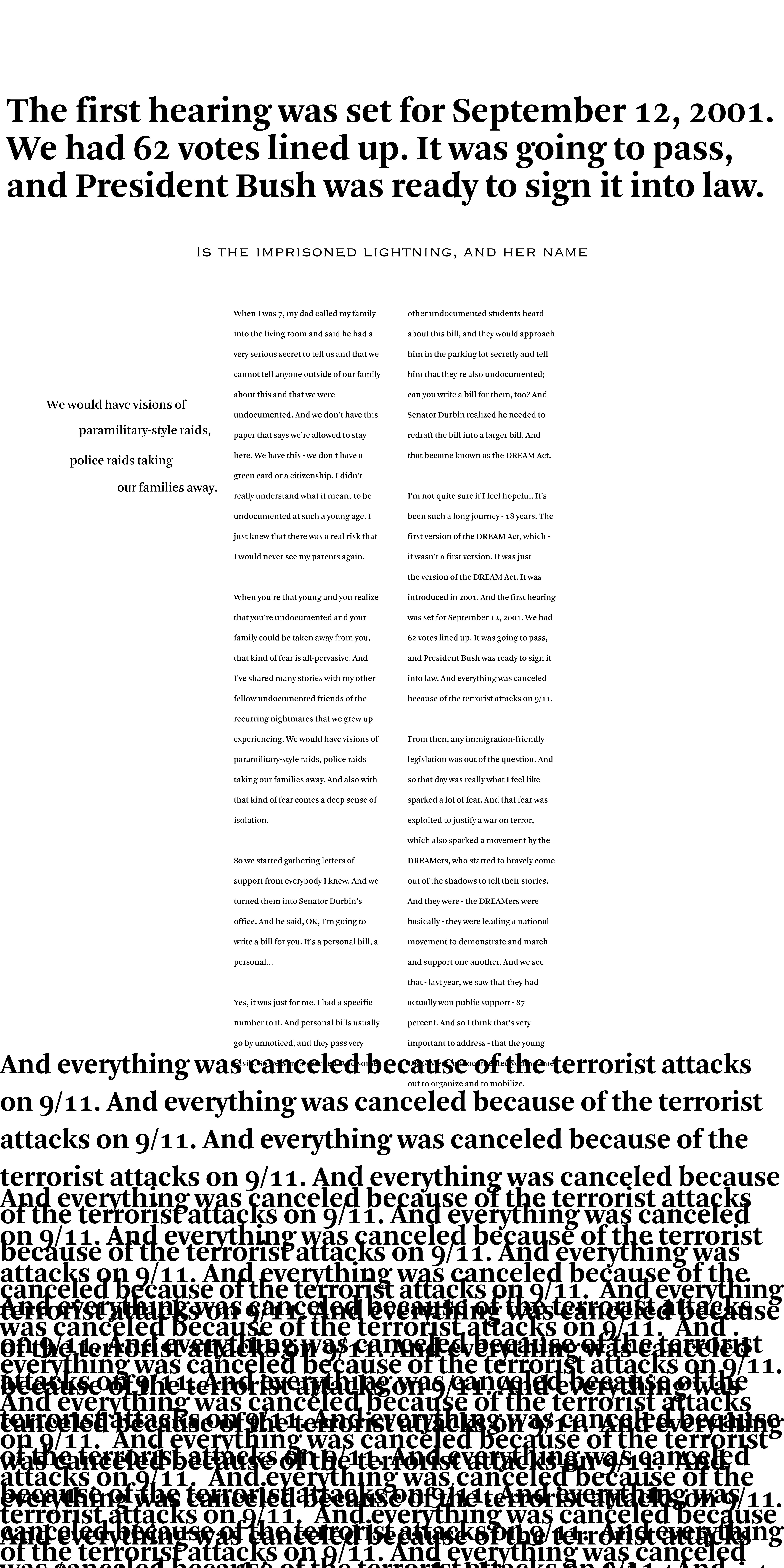 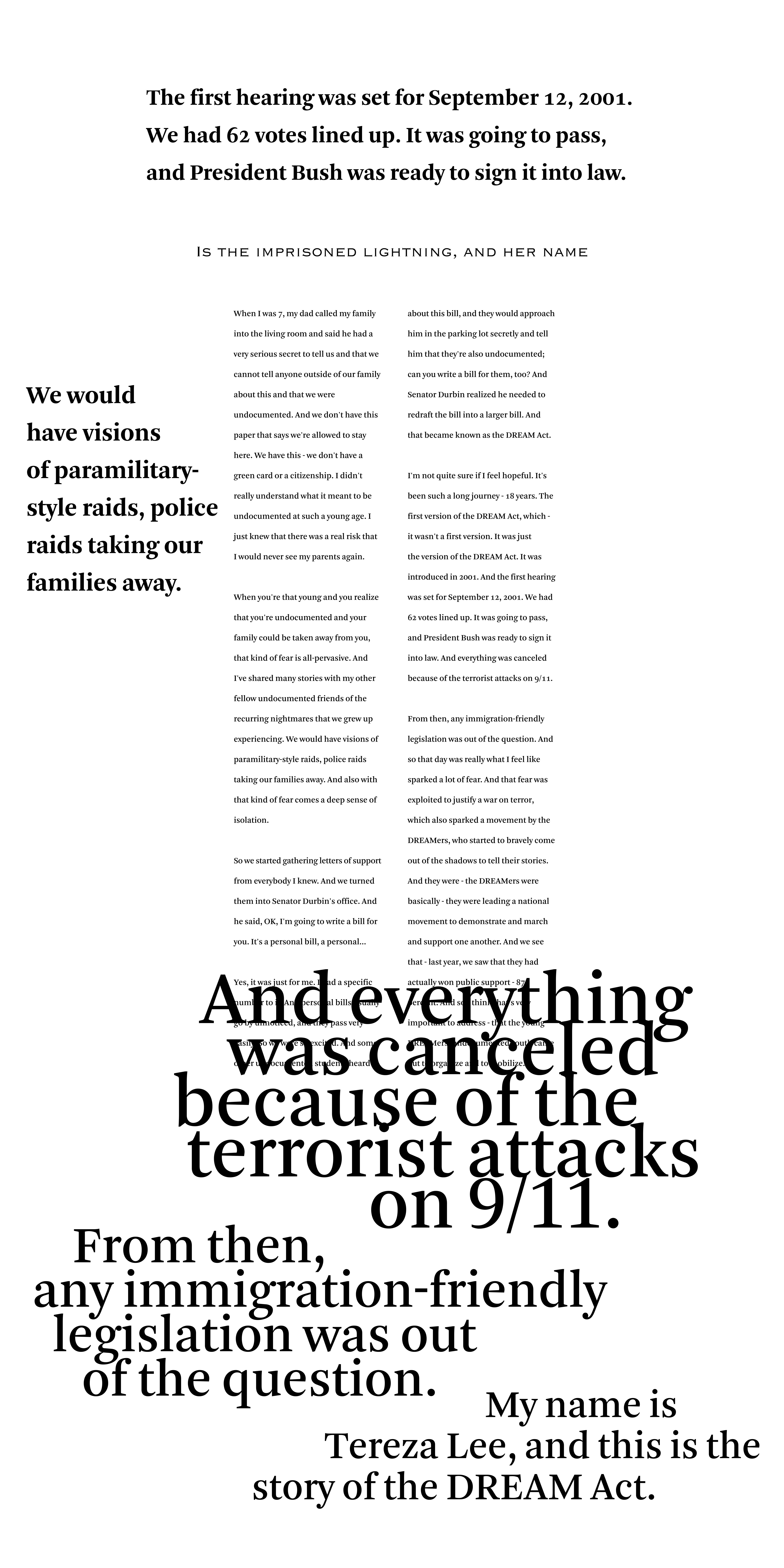 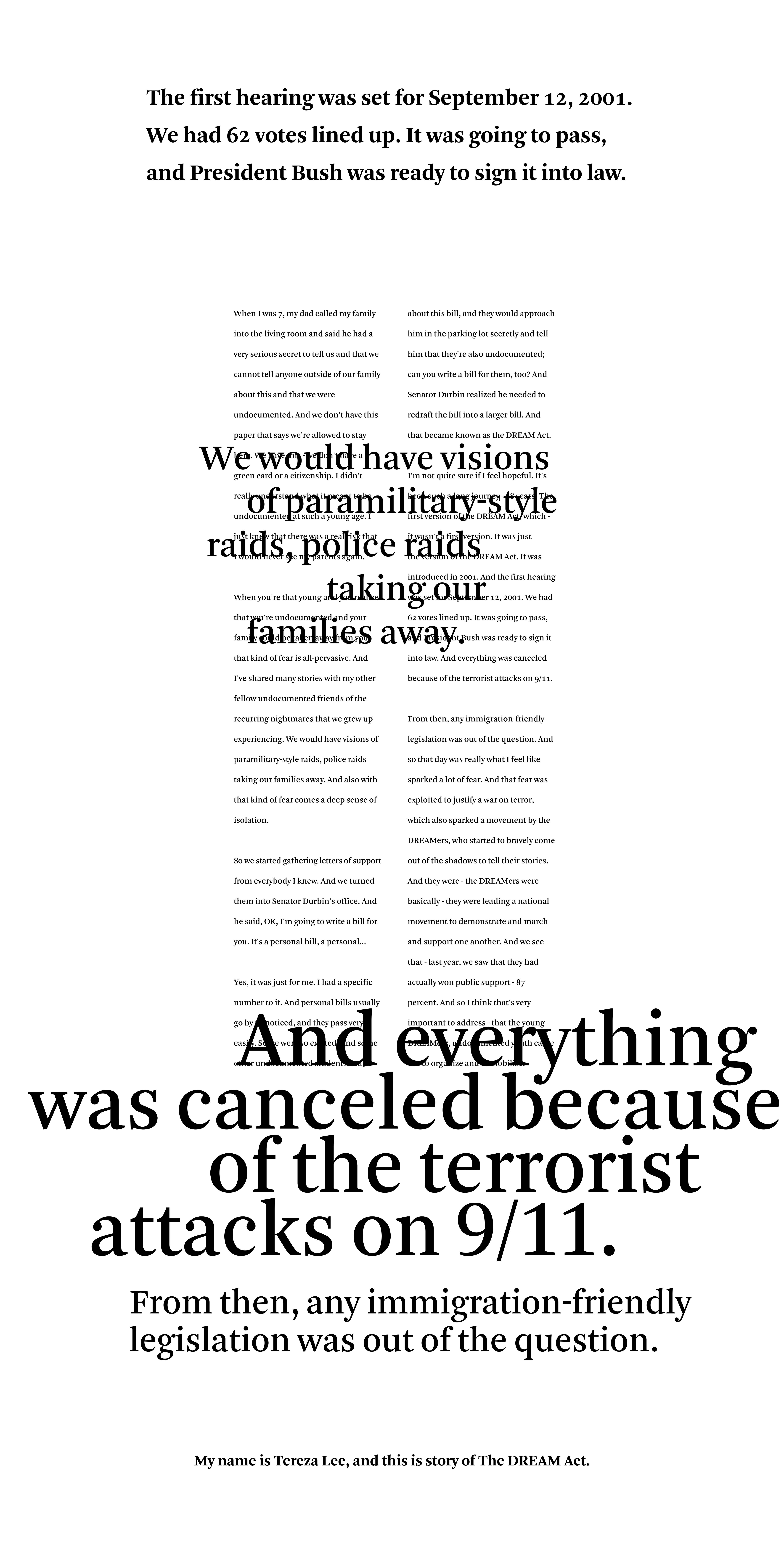 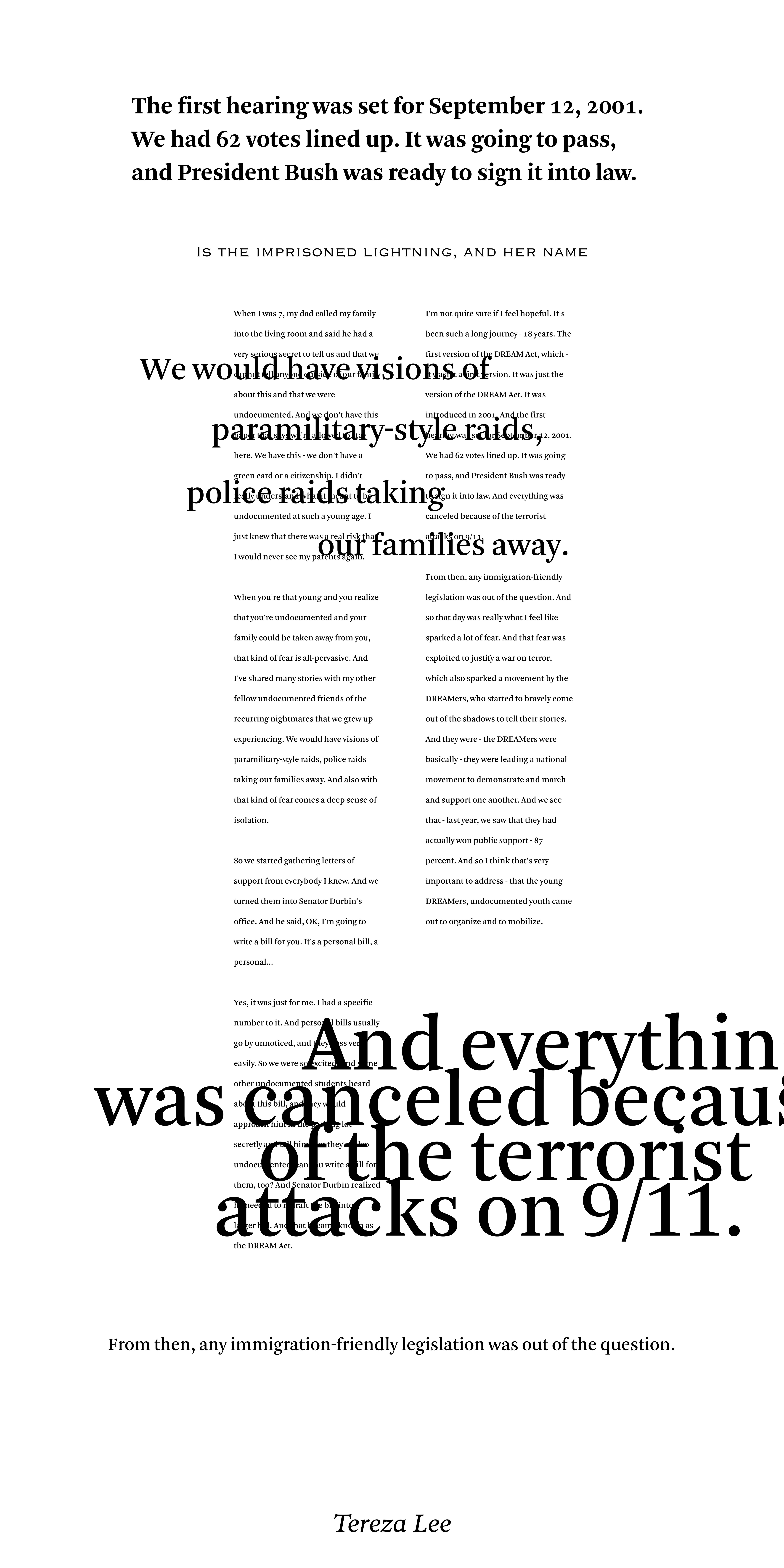 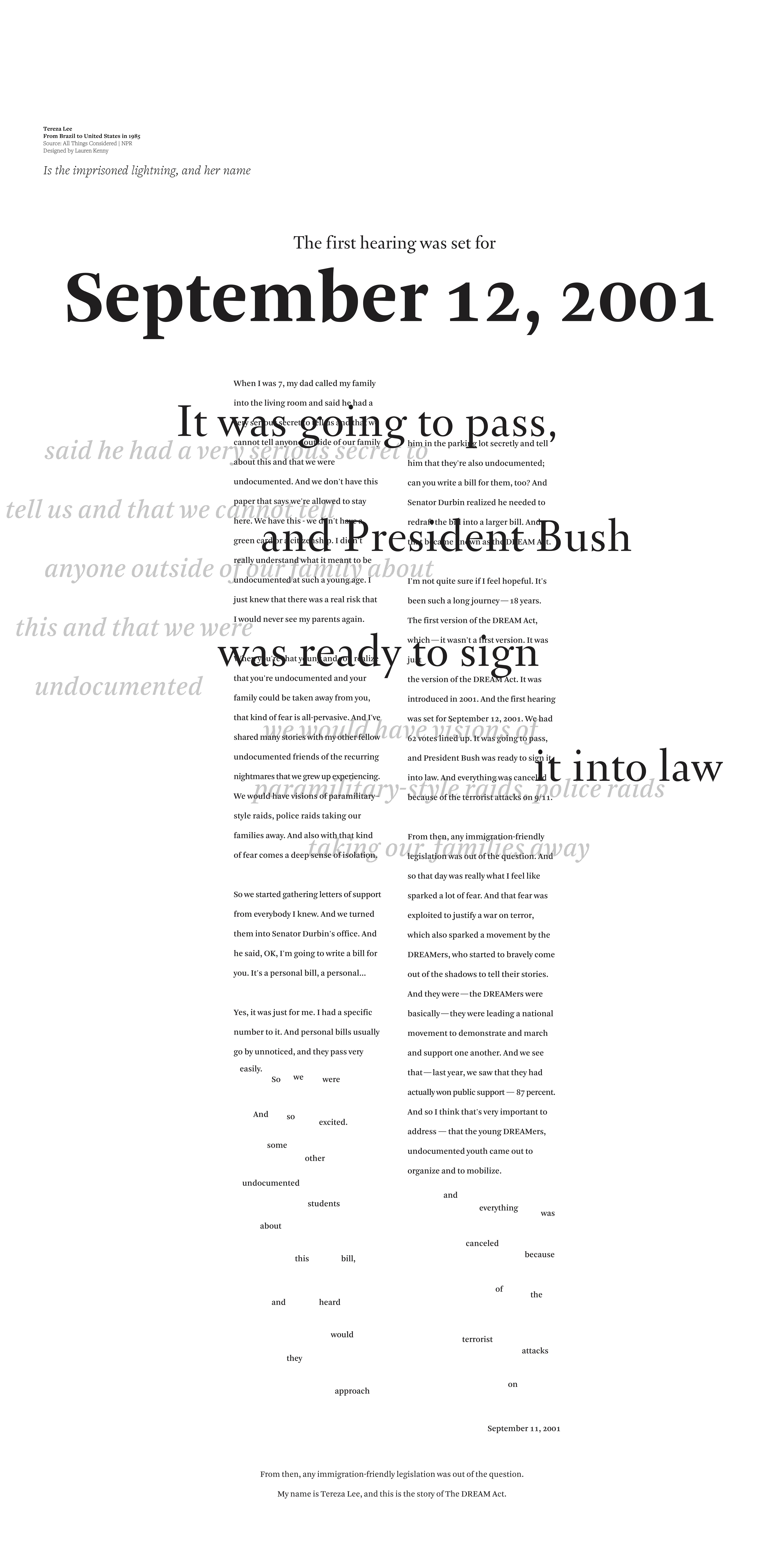 From this project I learned a lot about a visual designer's role as a storyteller. Because this project was constrained to only using black and white text, I was forced to push the boundaries of size, placement, and space to tell a story. I found that those things alone hold a lot of power and can have dramatic effects on the emotion of a piece. I also enjoyed playing with viewing distances and seeing how I could give people different experiences based on how far away they stood. This was a really fun exploration into environmental type and the creativity that can come when constrained.